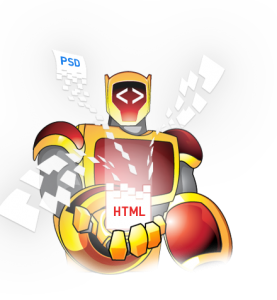 There will always be trends in the industry of website design, coding, and conversions. One of these could be the truly popular PSD to HTML conversions that many webmasters want for their current site. The term PSD refers to a file format that is produced by the app called as Photoshop. Pictures or images that are produced through digital enhancement using the   app mentioned above are commonly excellent in terms of detail and aesthetic qualities. This is what makes it totally desirable as raw material for website background or design. Many companies that offer PSD to XHTML conversion services are totally increasing in numbers now and this is a thing that excites many webmasters who want to join the bandwagon of people who own these beautifully made websites.

The services have become so diversified that it even the practical PSD to WordPress conversions and coding have become easily available at the current times. Companies like the xhtmlchop.com and many others are being seen exceeding the normal capabilities that other service providers in their category can generally show. Other coding formats such as Joomla, e-mail, Drupal, Responsive Web Design, Magento, osCommerce, and Opencart are also available now. The process of availing of such services has been simplified by agencies like the one mentioned above in order to encourage better client involvement.

Xhtmlchop.com, as an example, implements the 3-step system of service process. During the first stage, the client submits in the file which will serve as the raw material for the conversion. Websites usually start in this format. The commonly accepted formats include .psd, .png, .indd or .ai. Now, a client could also choose to let the company take care of the sourcing out of the raw material. Designers of the company could work on several pictures and these are shown to the clients for approval. Remember though that if this is the mode of service that will be chosen, extra fees would have to be paid and the turnaround times for the order would be affected to a great extent. The next phase or stage would be the payment and placement of orders.

Generally, the client would specify at this stage what kind of final output or website he or she might want to have in the end. A final quote is then computed and presented to the client.  The coding services company can only start the work when the payment has been given. Generally, full payment is required but there are others out there that won’t charge in full until the project is completed. The last stage would be the completion and checking of the final output. At this stage, a prototype website will be shown to the client and another change or output polishing tasks are done. There are companies that will send over a file of the site to the email of the client. Others would make the prototype site visible through the direct online facilities of the coding and conversion services provider. While exact procedures may vary, this is mostly the pattern that we will see in the industry.